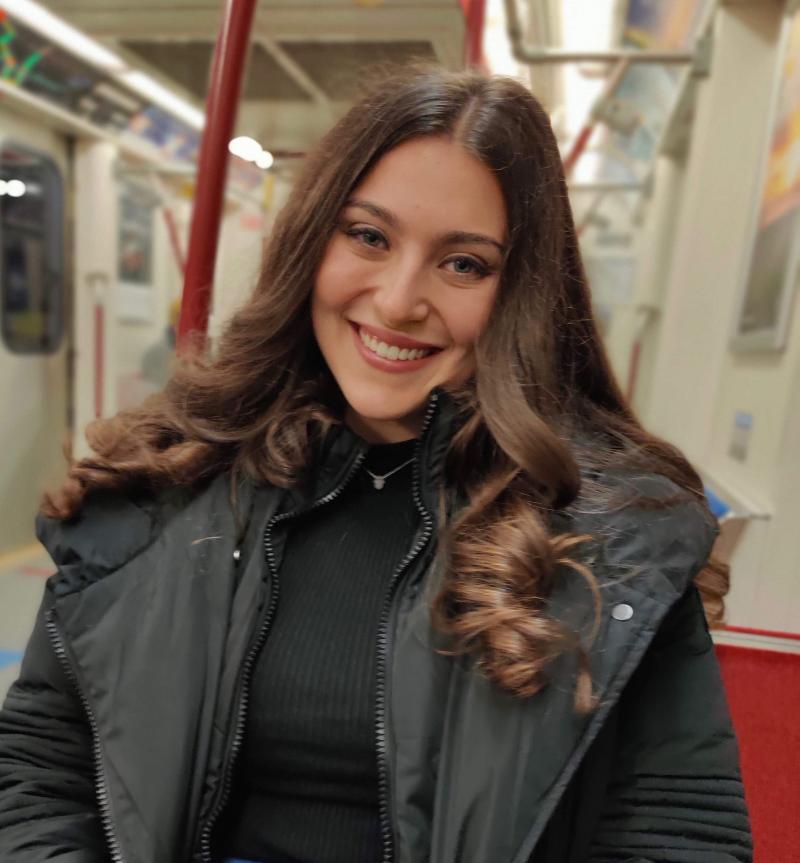 In The One, which recently won a writing contest hosted by the Consulate General of the United Arab Emirates in Toronto in partnership with Canadian Days Magazine and the University of Waterloo’s Renison University College, the Level IV Arts & Science student uses numerical characters — Zero, Seven-Tina, Two-Hunny, and more — to explore the concept of tolerance and acceptance in modern society.

“Twenty-Two’s, Blues, and Brews” was plastered above the door. Clever, he thought. He couldn’t remember the last time he ventured to this part of the line. Living and existing right in the middle of R was okay though. Surrounded, safe. He didn’t even want to be at this dumb event, but Hunny and Lev insisted he try it out. The dating world was intimidating, forbidden territory for a guy like him. Was it possible to be completed by another? What does complete mean? He could never grasp it; his physiology prevented that. Nevertheless, he rolled into that bar and was greeted by an Equals. An Equals facilitating a dating event made him want to roll his eyes and chuckle at the same time.

“Welcome to Natural Numbers and Connections speed dating night! Thank you for joining us tonight. The fee is only yourself… multiplied by 1.13 because we abide by government regulations and taxes,” she said sarcastically. “Can I see your ID?” He passed her his SIN card, and her eyes widened slightly at the sight of his digit. “Well lucky you—you don’t owe anything! You know, we only just allowed your type to come to these events. By definition, you’re sometimes considered a natural. Of course, no offense at all! I’m really all about equality. Geez, now you look upset. I am truly sorry. Have a seat at the table closest to the bar. I hope you find the one.

” He rolled over to the table, plotting his revenge on Hunny and Lev for making him come to this stupid thing. As he approached the striking woman, his thoughts immediately drifted off R and into the imaginary world. She was so even, so divisible. The buzzer rang, and before he was fully seated, she began speaking.

“I’m Twelve. I’ll cut to the chase, cuz I know what I want. I’ve had my fair share of bad digits – they simply wouldn’t divide me. Now that I’m a Bat Mitzvah, I’m a real woman, looking for a real man that can provide some division in my life.”

“Your evenness is quite magnificent. Was that weird of me to say? Sorry... You probably know my friend Lev. You’re neighbors on R.”

“Yes, I know Lev. Glad she’s found someone—Two-Hunny, or is it Hunny? Anyways, can you divide me or not?” “Well, um, actually, I’m not able to divide you. But you can divide me!” “Good Gauss! Don’t tell me you’re… yes, you are. Are you even a natural? Well, it’s been a pleasure meeting you—we could even be friends—but I really don’t want to be undefined.”

The buzzer went off. Defeated, he started rolling clockwise to the next table. Off to a great start, he thought sarcastically. As soon as he sat down, the woman began provocatively tracing her digit on his oh.

“Well hello, handsome. People call me Seven-Tina, but you can call me whatever you like,” she said, growling slightly.

“Hi, Seven-Tina. It’s nice to meet you. I quite like primes, actually. Sometimes I feel like a prime—got no factors either! So, what are your intere-"

“Listen, sweet cheeks. I’m going to be honest, brutally honest. I’m looking to find someone who is up for some sweet, sweet multiplication.”

He had only made multiplication a few times before. He was able to get a product, but no matter who he did it with, it always created more of him, and Gauss knows R doesn’t need any more. Maybe Seven-Tina was different. Maybe she’d be fine with that product. “Thank you for your forwardness. I’m definitely open to multiplication. So… what kind of products are you looking for?”

“I’m open to anything…. except Zero. It would be Gauss-awful having to raise a miserable Zero. Talk about an identity crisis! But then again, only a Zero could produce a Zero.”

“Oh… of course…. I… I understand completely.”

“I’ve been blabbering so much that I didn’t even get your digits. And you are…?”

Before he could respond, the buzzer rang (thank Gauss). As he rolled away, he faintly heard her call out, “What are your digits? Let’s multiply!” But he continued rolling, refusing to glance in her direction. If this next interaction was anything like the others… that’d be it! He’d roll on out of there, down R, and never look back. With nothing to lose, he sat down and began to rant.

“I’m Zero. If you have an issue with that, I’ll leave right now. Or if you want to get to know me, the real me, you’d see I’m more than just my digit.” “I like your confidence. I’m e.” “e? But you’re not a natural.” “Woah, buddy. You’re barely a natural either! I snuck in here disguised as Three. Close enough. I’ve always admired Zeroes. They don’t add anything to the table, but they also don’t subtract anything. Being irrational and stuff, I need that dependency in my life.”

“Thank you! So, what’s your sign?” “For the longest time, I was never important enough for one. Finally, I was given the letter ‘e’ by papa Euler.” “Funny you say that, because for like 5000 years, I’d be denoted by an absence of a symbol. It affected me quite a bit. Really degrading stuff. It wasn’t until much later that I actually got my infamous oh.”

“Also, I’m sure you know that I’m mostly used as an exponential these days. And me to the power of you is—” “One,” he said, cutting her off.

They gazed at each other for a few moments, then swiftly continued connecting. Turns out they lived only about 2.71828182846 doors down from one another! As soon as the buzzer blared, they strolled home together. Zero, who had been living marginally between the positives and negatives, evens and odds, rationals and irrationals, found someone who also felt like an outsider on R. Neither of them may be One, but together, they made One, and that was enough.